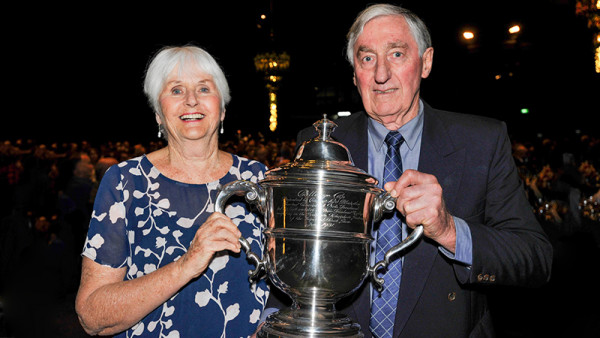 Horticulture's Bledisloe Cup for 2019 has been won by Gisborne horticulture leader, Bill Thorpe.

The cup celebrates a person who has made an outstanding contribution to horticulture in New Zealand.

Bill was presented with his award at the Our Food Future Horticulture Conference dinner at Mystery Creek on Thursday 1 August.

Bill has been associated with horticulture for 50 years.  He was involved in some of this country’s first commercial kiwifruit plantings in 1969.  By 1975, he had developed Gisborne’s first, seamless kiwifruit packhouse and export facility.

Bill has made a profound contribution to persimmon industry over the past 40 years.  In 1988, Bill became a founding member of the New Zealand Persimmon Industry Council, of which he remains an active member.  In 1997, Bill started exporting persimmons and was highly instrumental in the push into markets like China and the United States.

Bill is described by his colleagues as ‘commercially mature and unfailingly courteous’ and ‘an absolute gentleman and statesman of the industry’.  He is also known to be ‘relentless in representing the growers of the Gisborne region’.

In receiving his award, Bill said that it had been particularly satisfying to have spent most of his working life involved in such a dynamic and forward-looking industry.

‘To receive this award tonight is a real honour.  In the twilight of my career I am particularly honoured to join the impressive list of people who have their names engraved on this magnificent trophy.’

The Bledisloe Cup for horticulture was first presented in 1931 by the then Governor General Lord Bledisloe, for a competition between orchardists for the best exhibit of New Zealand apples at the Imperial Fruit Show.

It is one of several cups Lord Bledisloe presented to New Zealand and is similar to rugby’s Bledisloe Cup, which was also donated in 1931.

Click here to find out more about HortNZ's Industry Awards