First published in the December 2021 issue of the NZ Grower and The Orchardist magazines. 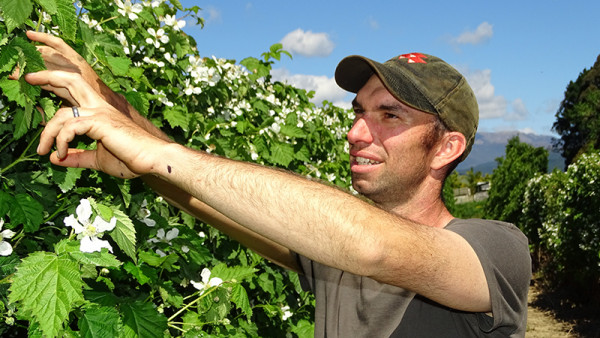 Jono is hoping for the right weather during the brief harvest this year.

Three generations of the Sutton family will be involved in the “organised chaos” of the boysenberry harvest that is about to crank into action on their Nelson orchard.

Jono Sutton has always associated summer with the frantic pace of the boysenberry harvest, working alongside his father, Stephen, and grandfather, David, to get the berries off the vines at the point they are ready to drop to the ground. And he thrives on it.

“I’m a bit of a freak in the sense that I enjoy being under the pump.”

Winner of the 2019 Young Grower of the Year competition, Jono is the younger generation on the family’s horticulture enterprise which grows 30 hectares of boysenberries and 30 hectares of apples.

Today, Eden’s Road Fruit sits on the Waimea Plains west of Richmond where the family moved the business after urban sprawl overtook their original Daelyn’s Orchard. Back then, the business was largely selling fruit direct to the public and it was a summer destination for locals and visitors.

Despite the site shift, boysenberries have remained part of the family’s operation, with a transition to five harvest machines instead of hand picking. For 11 months of the year the machines sit in the shed but come December 15 they are powered up to take the crop off the vines. Jono says the technology for the machines has been around since the 1980s but the newer models still have the same picking apparatus that was designed back then. 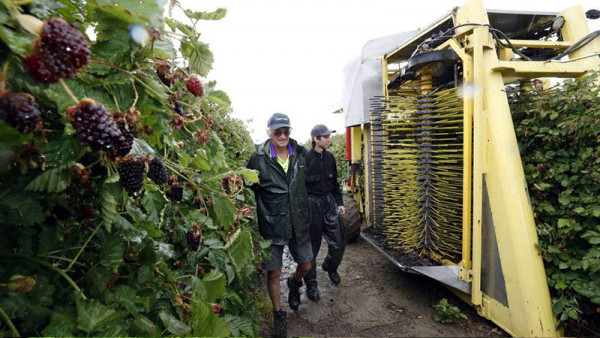 Jono's grandfather, David Sutton (left), amongst the boysenberry vines with the harvester machines at work.

A limited window for harvesting means the harvesters are working whenever the crop and weather allow. Consequently, the orchard needs a fully stocked spare parts department to rectify any failure on the machines as quickly as possible.

The harvesters start at 4am, weather permitting, and continue through to midday with a team of regular staff – many of whom only work for the Suttons during the boysenberry harvest. One or two of the staff even take annual leave from other jobs to spend a month in the berry garden.

Early morning is the best time for the harvesters to shake the soft fruit from the vines. Jono says it’s all about the physiology of the plants; capturing the fruit when the plant is relaxed.

“Plant activity is driven by heat,” says Jono. “So, when it’s hot the plant is active, whereas at night it’s not hot and the plant isn’t respiring and doesn’t have to do anything. It’s like relaxing its grip on the fruit.

“Boysenberries fall off and they either fall on the ground or fall into a box, and you have to be there to catch them.”

The family grows three boysenberry cultivars with the regionally apt names of Tasman, Mapua and Riwaka. The slight difference in their maturities helps spread the harvest over the month.

Weather has been the cause of three poor crops in a row now, including the wet, cold growing season last year. The Suttons were hoping for better boysenberry conditions this year and were grateful when the sun shone through much of flowering – a fortunate change given it was an extremely wet spring.

Wet weather is not only challenging for pollination, but can also let disease into the plant, says Jono. The orchard passed their average annual rainfall by mid-spring, so he is optimistic for a dry summer for the arid-loving boysenberries.

When there is wind and rain, the fruit becomes heavy and can be blown off the vine by the wind before it can be harvested. The crop needs constant assessing. Leaving the berry on the plant a little longer can significantly increase yield but when a big weather event is imminent, it is better to tighten up harvest, says Jono. However, this means they lose yield.

Rain or shine, it’s a balancing act between leaving fruit as long as possible – when brix is also up – and harvesting it before it falls to the ground. David, now in his mid-80s, has a good eye for timing harvest on each block of boysenberries and Jono says he is trying to learn everything he can from both his grandfather and father.

Harvested boysenberries head to Boysenberries New Zealand where they end up block frozen, individually quick frozen (IQF), or made into juice concentrate or purée for local and export markets. 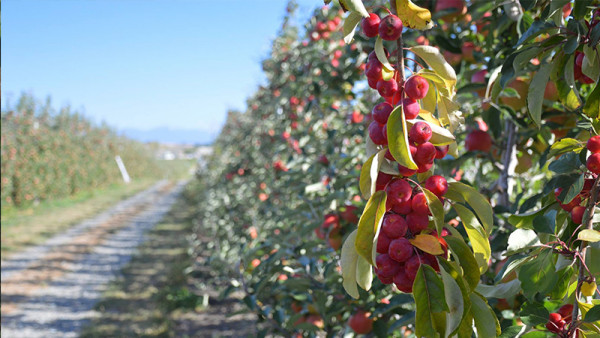 Eden's Road Fruit also use crab apples for pollination of its 30ha of apples.

The 30ha of apples on the family’s orchard complements the boysenberry harvest and helps to diversify the business too, says Jono.

“Often one crop will prop up the other during a tough year.”

The Suttons are fortunate to have a good team of permanent staff who manage apple thinning when the boysenberry harvest is in full swing too.

As much as Jono enjoys the organised chaos of the boysenberry harvest, he says one of the best things about growing boysenberries is the long down time after harvest.

“There’s nothing we need to do through to May, whereas apples never have a down time.”

When Jono isn’t on the orchard, he is helping to organise and facilitate the Nelson Young Grower competition to give other contestants the opportunity to broaden their horizons in the horticulture sector.