First published in the May 2022 issue of The Orchardist. 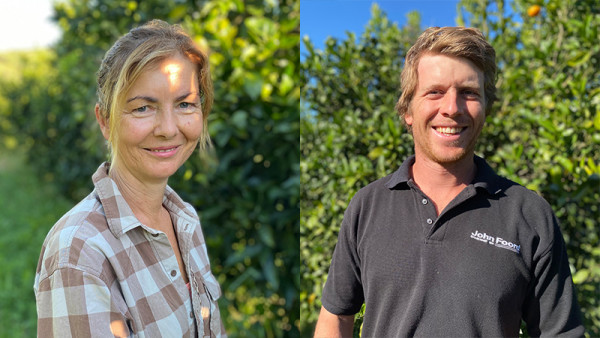 Gisborne orchardists Tam Jex-Blake (left) and Sam Tietjen hope their trial plantings will not only reduce their own use of insecticides, but will also help develop industry best practice to the benefit of all growers. Pictures by Kristine Walsh

Helping citrus growers increase their stock of beneficial insects, therefore decreasing the need to spray, is the focus of one of a range of projects that aim to help achieve a ‘lighter touch.’ By Kristine Walsh.

As a respected apple grower in the 1980s, Jeff Smith's dad operated his orchard in line with the norms of the day.

“Broad spectrum insecticides were applied on a fortnightly basis, and in terms of pests and disease, it was seen as a good thing to have a ‘clean’ orchard,” Jeff says.

“But as I came on board in the 1990s we saw the introduction of IFP (Integrated Fruit Production) and that changed everything. Suddenly we saw beneficial insects able to thrive in the orchard, and that meant some secondary pests became less of a problem.”

From its introduction in 1995 IFP had a big impact. With a focus on justified – rather than calendar – use of insecticides and fungicides, applications reduced markedly over the next few years.

But 25 years later Jeff believes that, as growers now know they can push this concept further, continual improvement is an integral part of Integrated Pest Management (IPM) and he has put his hand up to be part of the solution.

After spending the last 20 years working in the crop protection industry, Jeff signed up as project manager for the seven-year A Lighter Touch initiative, which aims to help growers adopt methods and crop protection measures that are less reliant on chemical use, and can help spur greater production.

While the programme has significant government funding in the form of $11 million from the Ministry for Primary Industries, a larger portion ($17m) comes from industry and the programme as a whole is industry-led.

That crosses product areas from arable farming to kiwifruit, grapes, onions, squash and tomatoes and in Gisborne, not surprisingly, citrus.

Every area has a different focus and the Gisborne fruit crops project looks at how beneficial insects can be brought into an orchard with strategic planting, rather than the established practice of leaving bare earth under trees and intensively mowing the grass strips between rows.

And for an agroecologist like Jeff, that is music to his ears.

On the surface of it, the two-year Gisborne project looks simple: two test growers are planting under and beside the trees with both flowering perennials (such as clovers and alyssum) and annuals (like buckwheat and phacelia).

The aim, says Jeff, is to enhance the agroecosystem and provide resources for beneficial insects to thrive, reducing the need for applications of agrichemicals.

It's not a new idea – many growers have for years been tinkering with initiatives such as understorey planting.

“The advantage is that by doing it in controlled conditions, we have lots of background research to put into play and can record measurable outcomes in New Zealand conditions,” Jeff says.

“It's about taking all that theory and putting it into practice in real-world conditions.”

Another advantage is that if things go wrong – as they do in real-world conditions – that provides learnings to save other growers time and money.

One such learning in the Gisborne project was all about timing.

Because the first opportunity for planting was in spring and suffered major rain events, followed by the quick onset of dry weather, the first test plantings faced excess competition from undesirable weeds.

“Autumn planting would have been preferable but because our first window of opportunity was spring, we went for it, and the fact that it didn't really work out is an important learning,” Jeff says.

“That doesn't mean spring planting is off the table … it is still an opportunity for growers, and this time we're sowing in both spring and autumn to record further results.”

Jeff Smith is based in Wairarapa, and having started his A Lighter Touch role in June 2020 – just three months after the first Covid-19 related lockdown – has been pretty much confined to base.

“That was hard … I came from jobs that had me travelling for 20 years and all of a sudden that just stopped,” he says.

“Zoom meetings have their place but I'm really looking forward to being on site a lot more. It's just great that we have such competent people on the ground in the various regions.”

In Gisborne that person is Matthew Carter, himself a grower as well as being technical lead for local company First Fresh, and a Citrus NZ board member with responsibility for research and development.

He says interest was already high when he, Jeff and other key players gave a presentation to Gisborne growers in September of last year.

And of the 20-odd who put their hands up to play a part, Sam Tietjen and Tam Jex-Blake were selected to run the pilot programme on their orchards.

With Sam's orchard Braemark based on fertile soil at Bushmere, just inland of Gisborne, and Tam's Iko Orchard at Manutuke, near the coast just south of the city, location was an important consideration.

“Plus, as well as being really innovative growers, they had the facility to lend both test blocks and control blocks to the programme,” Matt says.

“It's a shame we've had our setbacks, but Sam and Tam committed to mowing everything down and spraying it off to replant in autumn so it is all systems go.

“And we're optimistic that even in the time we have left we're going to see some good results, which we know the growing community is really keen to see.

No one wants to be spraying if they don't have to so if we can reduce that with strategic planting, then it's a win for everyone.

Having taken over his family orchard in 2018 (and being named Gisborne Tairawhiti Young Fruit Grower of the Year just a year later), Sam says his background in mechanical engineering means he's always interested in finding new ways of doing things.

He's already come up with new ways of spreading organic fertiliser and has developed a frame system for tree-skirt trimming, so didn't think twice about becoming involved in the A Lighter Touch project.

“I'd actually been thinking about it for a while so when this project came along I was keen keen to get on board and see some measurable results,” says Sam, who is using a hectare planted in Afourer mandarins as his trial block.

Meanwhile, Tam – who has her trial block in naval oranges – says that like many growers, she is keen on cover cropping that can help reduce the use of insecticides.

“There seems to be a lot of interest here in alternative methods that are good for our orchards and the environment in general,” she says.

“I feel that the results of this trial will give us industry best practice that will be of benefit to all growers in our region, so am really glad to be a part of it.”

With First Fresh on board to do the monitoring and another local company, Dragonfly, providing photography and videography services, Jeff says they will be well placed to get data out to growers around the country as the project progresses.

“What we found is that across the product groups growers want to move towards this type of crop protection regime … it is the way of the future,” he says.

“So we want to involve growers from the start by sharing how they can use these practices in an actual orchard without having to reinvent the wheel, and by merging them into what they are already doing.

Basically, the aim is to use monitoring and insect counts to deliver a research-based but practical how-to guide so growers can go ahead on their own.

“But the two-year project is really just the beginning. For example, Citrus NZ might like to continue that monitoring to build a data set that shows the long-term outcome of working on the ecology of the orchard. And growers will need to work out how their new biodiversity impacts on their spraying programmes … how much softer they can go.”

Back in the 1990s, change was largely driven by market acceptance and Jeff Smith believes that is still an important consideration.

“But these days it's about more than that. As well as looking for a better consumer response, growers want to feel good about how they are running their orchards and that's where projects like ours come in.”