With three decades of growing tomatoes under their belts, Te Puna couple Eddie and Lyn are a familiar fixture at Tauranga Farmers’ Market. HELENA O’NEILL talks to Lyn about scaling back their commercial operation into a more modest business while remaining enthusiastic about growing fresh produce in the Bay of Plenty.

A short drive from busy Tauranga is the rural paradise of Te Puna. Here on a half-hectare plot overlooking the bay, the Pauls have spent the past 30 years growing tomatoes, cucumbers, and a few other vegetables for the domestic market.

“We were dairy farmers. Ed had an uncle who grew tomatoes in Otahuhu during the 1950s until the early 1970s. Ed’s father was a great gardener and Ed just thought that growing tomatoes might be a good thing to do.”

To help make ends meet as they set up their tomato operation, Lyn returned to nursing for a “short time,” but ended up spending 20 years nursing while Eddie ran the horticulture business. 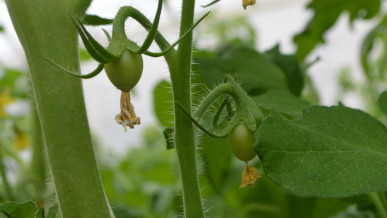 “We physically built the glasshouses ourselves. We bought a Faber glasshouse which arrived on the back of a big truck tied up in bundles. A couple of guys came down and stayed for a couple of days in the pouring rain and showed us how to build it.

“We grew in the soil of course, and we found a consultant, but it was a really steep learning curve. It was trial and error, but we did okay. The first crop we grew were cucumbers because we thought we were too late for the tomato season. Our first crop of tomatoes we grew in March 1991. We grew in the ground and then we changed to sawdust bags before changing to rockwool in the early 2000s.”

“We’re very small for a tomato grower. In total we have three glasshouses – the big Faber is 1000m2, a smaller plastic house that is about 700m2, and then a little glasshouse that we don’t grow in anymore. We pulled out that crop just before Covid-19 started.”

While it’s easier to grow plants under glass, the Pauls are growing in the plastic house because it’s smaller and easier to manage for just the two of them.

“We spray as little as we can, and we use organic sprays. Our biggest problems are botrytis of course, but also whitefly. We’re always on the lookout for tomato potato psyllid (TPP), but we don’t have huge problems with it. The past couple of years we’ve sprayed quite minimally. I think that’s down to good luck. We’re very clean and very fussy in the glasshouse. Being observant and getting on top of things before they get out of hand really does pay off.”

And the secret to growing flavoursome tomatoes?

“Feed them. We do all the things that you’re supposed to do like crop management and registration – measuring the plant, the length of leaves, and all the rest of it. We mix all our own feeds ourselves and when we get into trouble, we ring someone and ask them. Mostly I think it’s the way we feed them. We tend to feed them quite heavily. Our tomatoes do tend to be on the bigger side.

“Ed over the years has become really good at looking at the plants – he can read the plants. It’s observation I think.”

This year they have reduced the number of plants from 3000 to 700 but hope that they will plant more next year if their health allows.

“We usually grow capsicums, Lebanese and telegraph cucumbers, eggplants and beans. We’ve cut some of that out, we’ll grow some cucumbers, but we won’t grow the capsicums and eggplants this year.”

“We were lucky because when Covid-19 came, we had just planted our crops, so it didn’t really affect us. For the next shutdown, Farmers’ Markets New Zealand had gone into bat with the Ministry for Primary Industries (MPI) and we [Tauranga Farmers’ Market] became a retail business and could remain open under the same rules as retailers. We voted not to be a vaccinated market, but you had to wear a mask and were limited with visitor numbers for a couple of weeks.”

Selling their produce at the local farmers’ market is a great social outing for the couple, but also an effective way to get feedback from their customers.

“The biggest thing is being able to talk to our customers about our produce and meeting their needs. We pre-bag a lot of our tomatoes because our stall is so busy, we don’t have time to sell loose. We get good feedback from customers about the product whether it didn’t keep last week, so it’s a good quality control on your product as well. You don’t get that from your broker, you just get told it didn’t sell,” Lyn says.

“We also have people come back giving us jars of chutney and recipes that they use. Along with a few hints, there is quite a bit of discussion of how to use them.”

And more than 30 years later when others have taken up retirement, Lyn says she and Eddie still enjoy growing their crops.

“It’s just because we like it. There’s always that challenge to have the perfect crop. It always starts out perfect and then something happens. Every season he says this is my last year. And then we end up planting,” she laughs.