Full potential of walnut industry yet to be cracked

Being one of the pioneers of New Zealand’s walnut industry offered plenty of challenges, but for one Canterbury woman growing walnuts is hugely rewarding. HELENA O’NEILL talks to Dr Heather North about the young industry and its promising future.

Setting up a walnut orchard is a long-term investment, but the industry is young and full of potential, Heather says. 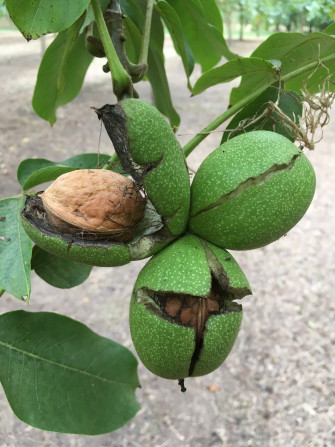 In 1998 Heather formed a business partnership with Dr Clive Marsh, starting Lightfoot Walnuts on a 16ha plot near Lincoln in Canterbury. They began planting that same year, with the bulk of trees planted in 2001 and 2002, finishing by the end of 2003.

It was a busy time as both Heather and Clive worked full-time jobs. Heather has a doctorate in image processing (measuring the movement of glaciers) and she now works as a contractor on satellite remote sensing to map New Zealand's agricultural land use. Being self-employed allows Heather to set aside time each year to work full-time on the harvest. Clive’s doctorate is in engineering science, and he previously worked for Lincoln Agritech.

It was a learning experience, Heather says, as they were also sorting shelterbelts and irrigation systems while working their regular day jobs. Getting enough young trees to plant was another issue as there was a limited amount available at the time they were setting up.

The orchard now boasts 2700 fully established walnut trees and has been profitable since 2014.

“Our trees are mainly Rex, which is probably three-quarters of our orchard, with the rest mostly Meyric although there are a few other varieties in there.”

Rex is currently the most widely planted variety in New Zealand, yielding 2 to 3.5 tonnes per hectare at full production, depending on climate and disease conditions. Meyric is also used in many orchards. It has good nut quality but is less robust to walnut blight and tends to have lower yields than Rex. A third variety, Shannon, can yield more highly than Rex but has early budburst and flowering, so is more suited to areas with low frost risk.

Heather says they were the recommended varieties that came out of trials that the New Zealand Tree Crops Association (NZTCA) and Lincoln University did back in the mid-1980s through to the early 1990s.

The New Zealand Walnut Industry Group (NZWIG) was incorporated as a society in 2001. It grew out of the strong Tree Crops movement that started in the 1970s and another group called the Southern Nut Growers Association.

The industry group has ongoing trials, and of the three imported varieties, Lara is so far performing the best, and is higher yielding than Rex. The trial is only part way through, with data still to be gathered for another five years. The other two imported varieties – Howard and Tulare (both from the USA) – are not yet showing such good yields in the trial, but Heather says they both perform very well in California and Australia, so larger crops would be expected as the trial continues.

Heather is a founding member of the industry group and is keen to see more walnut growers join the industry.

"Walnut growing is an option for a farmer looking to diversify their land use or a lifestyler thinking about what they want to grow on their property. We have things quite well set up in terms of our orchard management practices and get some more supply through the processing factory."

Walnuts New Zealand Co-operative is a group of about 50 walnut growers, mostly in Canterbury, with some based in Otago and Nelson. They operate their own processing factory at West Melton in Canterbury, marketed under the Trickett’s Grove brand.

“Most of our walnut supply in New Zealand is imported, so we only fill a small percentage of the domestic market so far.

“The factory is going quite well. There’s a high-tech sorter there to do colour sorting and infrared sorting of the walnut pieces, so all of that is done in an automated way which has been a major investment from us as a co-op. It has quite a high capacity available so it can definitely deal with more walnuts.”

Growers and processors sell walnuts to consumers as kernel pieces for snacking and baking, in-shell, or as products such as walnut oil, flour, dukkah or walnut paste.

For those thinking about growing walnuts, water availability is an important factor in choosing a site. Walnut trees are unlikely to die from water stress in New Zealand, but lack of water will greatly affect growth and production and the nuts will not grow to full size.

In most of the drier east coast climates recommended for walnut growing, rainfall during the summer period is not sufficient and irrigation will be needed. The most common system used in walnut orchards is sprinkler irrigation, where each tree has its own micro-sprinkler, throwing water to a diameter of 6m to 7m. Dripper irrigation is an option in the first few years, but root development may be restricted to the smaller wetted area of the dripper, she says.

“Anywhere on the east coast is fine as far as climate goes. You really want a low-humidity climate otherwise you’ve got a lot of disease pressure, which is walnut blight in this case, it’s a bacterial disease. You could grow them in Marlborough and Hawke’s Bay, but those places are already full of grapevines and the like. Some are in Otago or Nelson and scattered around elsewhere but the bulk of walnuts are in Canterbury.

“There’s actually not too many things that walnuts are prone to other than blight and root rot.”

Bacterial walnut blight is the only disease that New Zealand walnut growers need to spray for routinely, she says. It causes black lesions on the walnut husks, which can go through and rot the kernel. It is usually managed with applications of copper-based sprays, often mixed with dithiocarbamates (dithane/mancozeb). Some copper sprays may be used in limited amounts by organic growers.

The spraying season is from late September until Christmas and the frequency of spraying increases with rainfall, humidity and temperature. In a dry season, three sprays may be sufficient to effectively manage blight, whereas in a warm, wet season, as many as six sprays may be required.

The other main disease for walnuts is Phytophthora, a soil-borne fungus that attacks and rots the roots of a tree; it is the destruction of the root system that kills the tree. Phytophthora thrives in over-wet soils, and it is difficult to eradicate the fungus from the soil and root system once it is established there. Walnuts should be grown in free-draining soil and not over-watered. 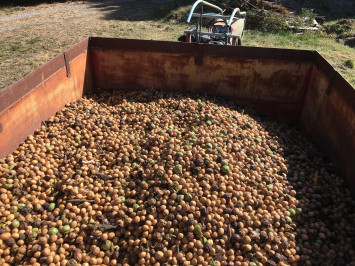 “We’ve been at full production since 2017 when the canopies were touching so you’re using the whole land area for production”, Heather says. “Even prior to that point we were producing some reasonable crops.”

She says you might get enough for a small harvest at year six or seven, building up until full production at year 16 or 17.

Orchard sizes commonly range from four to ten hectares, with some as large as 20ha to 40ha. At this stage, the typical New Zealand orchard is small by international standards, but Heather expects to see more large orchards as the industry continues to develop.

“There are a couple of orchards larger than ours, the trees are a little bit smaller, but their crops are starting to surpass ours. We’re starting to see some really pleasing crops coming through. It is quite early in the walnut industry.”

Harvesting usually runs for about four weeks from late March to late April.

“The harvest season was a little bit shorter than four weeks. We had really good quality and we’re happy with our crop this year.”

Once established, a walnut orchard is relatively low maintenance. Walnuts drop when ripe or are helped along by tree shakers towards the end of the season before being lifted from the ground and then washed, graded and dried.

Mechanical harvesters can be used to pick them up – human fruit-pickers are not needed, which keeps the labour requirement at harvest relatively low compared to some other horticultural crops. Harvesting on very small orchards is more of a manual process, however, with the use of hand-pushed nut rollers.

“Our maximum crop from our orchard has been 44 tonnes in a year, while this season is roughly 35 or 36 tonnes. With the Rex variety that we are growing at the moment, we are seeing orchards doing 2 to 3 tonnes per hectare when they’re at full production. I’m hoping that as the new varieties that we’ve imported are planted we would hope for better production going forward.”

In February about 30 people attended an open day organised by NZWIG and Walnuts NZ Co-operative, aimed at those interested in growing walnuts commercially. The event was held at Andrew and Jo Horsbrugh’s 43ha Tunlaw Farm near Rolleston. Heather and other growers hope interest in the industry will continue to grow and lead to the development of new walnut orchards.

“I’m quite hopeful that we will see more walnut orchards scattered around in our landscapes. Maybe people will feel it will be a useful thing to integrate into their farming systems,” Heather says.

First published in the July 2022 issue of the Orchardist magazine.