First published in the February issue of the NZGrower. 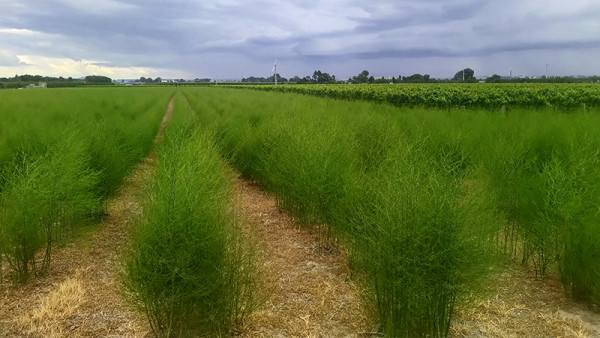 The ferning-out stage of the annual cycle of an asparagus plant allows it to gather energy to produce good spears the next season. Picture supplied by Asparagus Hawke's Bay.

It was two tales of one season for asparagus growers as bigger operators were hit by export barriers and constricted markets, while more localised ones met or even exceeded previous targets.

Despite “pretty favourable” growing conditions, he says an imperfect storm of limited labour, constricted demand and a near-halt to export led to the worst returns he has seen in his seven years in the business.

“Auckland being in lockdown had a real impact in the food service industry and with air freight prices being through the roof, everything had to be consumed by the local market and returns plummeted,” Sam says.

“Probably the biggest thing though, is the continued rise in labour costs in what is a very labour-heavy industry. But that's been building for a while. For a number of years now our returns have not changed while costs have been going up and that is not sustainable.”

To cope with oversupply during the 2021 season, a number of growers mowed some of their crop – putting it out of action for around a week until new spears were produced – while others let the crowns fern out which, while knocking them out for the current season, can lead to better results for the next.

Sam Rainey managed to pick around 90 percent of his crop but says even that reduction, together with skinny margins, made for a rugged season.

However, he believes there is hope for larger growers in the $5 million robotics project. Sam sees it as an exciting development for an industry that relies on manual picking of each spear to harvest a crop.

The Ministry for Primary Industries, Bay of Plenty company Robotics Plus and the Asparagus Council, are working on a four-year programme to develop a mechanical harvester.

According to the Minister of Agriculture, Hon Damien O'Connor, saving on labour would reduce costs and boost production, allowing growers to compete in the export market and to reduce their dependence on domestic buyers.

“Together with rebuilding the export market and further developing our base of domestic customers, we hope there is some light at the end of the tunnel,” Sam says.

“But it has never been done before, it is completely new and it's a few years away yet. So while we are looking forward to the impact that could have in the future, in the short term we are realistic about the challenges we are facing.”

To tackle those challenges, New Zealanders need to be encouraged to eat more asparagus, he says.

“Supermarket data shows that younger people aren't really a big market for us so we need to find out why and work to help them get cooking and enjoying asparagus.”

Asparagus plants take three years to start producing so there is a lot of capital investment that growers don't want to walk away from, he adds.

“We are a small industry with limited resources but we really need a big push in the market, and that's the council's goal as an industry body.”

The size of the industry means about ten registered growers produce around 90 percent of the recorded annual crop, but Sam says there are a number of smaller operators that can sometimes be more nimble in meeting problems head-on.

Producing some 70 tonnes of mostly green and some purple asparagus, the grower – at Twyford, just out of Hastings – is still a significant player but small enough to turn on a dime when needed.

The market was kind to Asparagus Hawke’s Bay too. In 2021, the company had good returns for both produce sold direct to consumers and the bulk which is moved by local growing, packing and marketing company, Gourmet Blueberries.

Iain's Trotter Farm in Hawke’s Bay had one of the best growing seasons he has seen, with demand “pretty much on a par with what it normally is.”

That was despite having to mow off one of his older blocks to deal with a prolonged deluge of heavy rain.

“But asparagus is a really robust crop so even if you do mow, it's only a few days before it is coming up again.”

Managing its labour force, too, worked out well in the 2021 season.

“The economy in Hawke's Bay is pretty much based on contract labour so we have a good system of having workers available right on the off times for other local crops like apples,” says Iain.

“Even when work like apple thinning picks up around mid-November we can manage it by sharing crews who might, for example, harvest asparagus in the mornings and go out to the orchards in the afternoons. It works for all of us.”

To ensure his own smooth work programme, Iain also grows grapes, which are most demanding when the asparagus plantings are not.

“This year we stopped picking asparagus on December 11 so we got a bit of a break before getting back into the grapes in January,” he says.

“When the weight picked per day drops we see that as the asparagus telling us it is nearly done, and stopping that little bit earlier helps make for another great crop for the next season.”