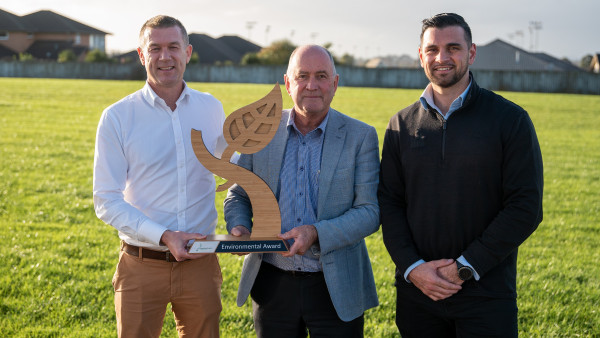 “MG has won the award in recognition of its real commitment to environmental sustainability,” said HortNZ President, Barry O’Neil who presented the award at a vegetable growers’ function in Pukekohe on 27 July.

“Thanks to MG’s focus and investment, the cooperative has made a measurable long-term difference, delivering a 57% reduction in carbon emissions by converting to natural refrigerants, installing solar and diverting food waste away from landfill at its flagship branch in Auckland.”

Two years ago, MG signed off on its first sustainability roadmap, which has set the direction and defined improvement targets. This included focusing on their Auckland branch, having worked out that the bulk of their carbon emissions came from electricity consumption, refrigerants and food waste.

“As a co-operative, we have a strong focus on making decisions today that benefit future generations,” said MG General Manager of Communications and Sustainability, Ellery Tappin.

“While the sustainability projects delivered at our Auckland branch have been driven by the MG Board, management and team on-the-ground, the improved performance is delivered on behalf of the grower-shareholders who own our co-operative.

“We are particularly proud that our investment in sustainable projects is not window dressing - rather, it’s making a real, measurable difference.”

Barry said HortNZ would usually give out its annual awards at the annual Horticulture Conference.

“Sadly, we decided to cancel the Horticulture Conference this year due to all the uncertainties created by Covid. However, the HortNZ Board felt it was important to celebrate growers’ success, so the annual awards are being presented at replacement grower events around the country.”

Other award winners will be announced at a vegetable growers’ event in Christchurch on 4 August and at the HortNZ AGM in Nelson on 21 September.