First published in the June 2022 issue of The Orchardist. 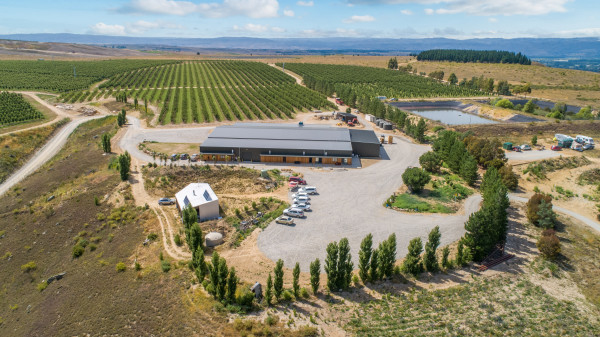 The new packhouse makes a statement

One of the youngest fruit growing grandsons from the original Paulin family in Central Otago, has created his own cherry orchard, along with a state-of-the-art packhouse.

3 Kings Cherries managing director, Tim Paulin, has spent the past three years clearing land on the foothills of the Dunstan Mountains north of Clyde for his new 40ha orchard.

His new packhouse can process up to 1000 tonnes and has a temperature-regulated processing room, as well as full staff amenities. Built by Prospec Structures, the packhouse is made of insulated panels imported from Germany, which have a food grade paint finish, and hot dipped galvanised structural steel framing.

3 Kings Cherries was named by Tim’s uncle Peter, and the name relates to a trio of rocky schist outcrops that sit directly to the east of the orchard overlooking Earnscleugh.

The Paulin family celebrated a century of harvesting summerfruit late last year. Tim is a grandson of Robert Noel Paulin. His brother Dennis is co-owner of Dennys Orchard, and older cousins (Peter’s sons) Kevin and Raymond, with their wives, own and operate the Clyde Orchards.

There are three sisters in the mix as well, and Tim’s eldest sister, Kathy Forrest, bought the family orchard from their father Des.

Longevity seems to run in the family. Des is 96 and still lives in Alexandra, as does his brother Frank; and another brother Brian, is in Wellington).

Tim always wanted to own his own orchard despite his father doing his best to dissuade him, saying the long hours and time away from the family took its toll.

“But it’s all I know and have known since I was fifteen.”

Starting his tertiary education at Lincoln University, Tim studied a Diploma in Horticulture and Management and came back home to Alexandra to work on Clyde Orchards, belonging to his cousin, managing the Bannockburn operation for 18 years.

Looking for a new experience, Tim headed to Canada and worked on apple and cherry orchards, as well as horse ranches in Washington State. Coming back home, he crossed paths with nurse Tisha McCaw at an emergency call-out where Tim was part of the fire brigade. They got married, and the couple now have four children.

Tim is also the operations manager for Fortune Fruit, but a few years ago he started looking to find a shareholding in the industry and gain more control over his orcharding life.

“If I was going to work this hard, I wanted to have some ownership,” he says.

A fellow industry member that Tim dealt with regularly was a keen investor and said to him, “you find the land, I will find the money.”

Tim and Tisha had often gone running together in the foothills of the Dunstan Mountains. They had noticed patches of warm air, and decided the lie of the land could be suitable for fruit production.

But before any orchard could be planted, gullies had to be filled in, thyme, broom and gorse removed, the entire property rabbit fenced and irrigation installed, using the Dairy Creek Irrigation Scheme.

3 Kings Cherries is made up of several New Zealand shareholders – Chris Tremain and Geoff Norgate being the general partners – who are family driven and who the Paulins have learnt so much from.

They grow the rare Lani variety of cherry, which only three or four other Central Otago orchardists have the rights to.

There is also Lapin, Sweetheart, Regina, Staccato and Kootenay, and because the industry doesn’t have enough packhouses for every grower, they processed other orchards’ cherries last summer as well, employing up to 26 people in the peak of the season.

They expect to employ more workers in coming seasons, working with GoHort and other organisations to help recruit staff.

There hasn’t been a new cherry packhouse in the Clyde Valley for at least 20 years, and more technology will soon be added.

Because 3 Kings Cherries is a brand new orchard with a brand new crop, Tim says they had no extra workers to call on, and at one stage successfully trialed using younger pickers, who worked just half-days at a time to get used to the level of physical labour.

“It’s about building a future of workers,” Tisha says.

When asked how she finds orcharding life with four children and a husband away for hours and days at a time, Tisha said she’s adapted well.

“We’re lucky and we love the environment, so I’m not bothered to be here all of the summer,” she says, referring to many missed Christmas holidays while the season was in full swing.

“It is tough and not for the fainthearted, but my husband loves what he does, and we can only take positives out of it.”

Tim has also had to endure frost fighting at 3am, while Tisha worked nightshift at the local Dunstan Hospital, so there has been sacrifices on both sides.

She now works one day a week while supporting her husband in the new business, which fits family and working life together much better.

So how did Tim know that his new cherry orchard venture, on once wild untamed land, could be possible?

With Tim’s extensive background in orchard management, and the time and effort put into being a fruit grower, he is extremely passionate about cherries and believes that is the X-factor needed to produce great fruit.

“I have been so lucky to go from dirt and grass. I was the first to put cherries up here, and now others are doing it.”

Tim said, at the end of the day, only ten per cent of what you do changes what happens out on the orchard, “because your site and mother nature dictates everything.”