Hugh Ritchie – Hawke’s Bay cropper, sheep and beef farmer, and Horticulture New Zealand board member – has used Kiwi ingenuity alongside European technology to recycle vast amounts of water in his mobile, post-harvest carrot washing operation, which can be moved from paddock to paddock.

Previously, after harvesting his carrots, Hugh would ship truckloads of carrots to a plant in Hastings where they would get washed. From there the carrots would be shipped to McCain’s processing plant and the sediment that came off in the washing process was trucked back to the farm to be put back on the paddock. 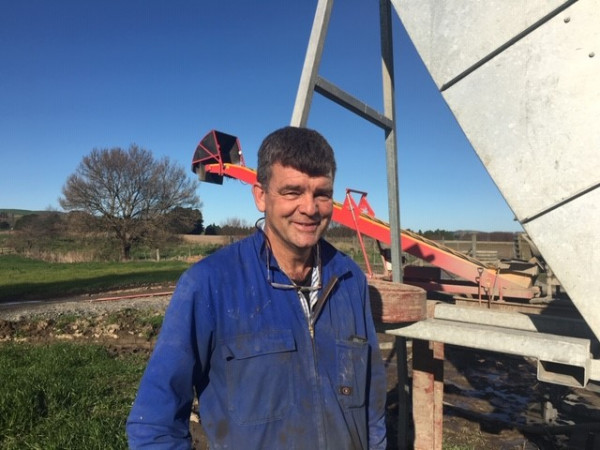 Now, using high tech equipment from the Netherlands, including a water recycling unit, a modified 40-foot shipping container for water storage as well as an old potato tumbler from McCain’s, Hugh retains the majority of water used during the washing process. He also siphons off the dirt sediment into ponds to be reapplied to the paddock once any water has drained away.

“I knew we had to do something better than just letting the water run away. The flume uses about 20 cubic metres of water an hour to keep it flushed and fresh and then we are probably using 10 litres a second through the sprays.”

The washer could be fed with new water that then runs off, or as Hugh has done, recycled to use throughout the harvest.

“Because it is mobile, we can take it to the paddock where the carrots are being harvested. You can see all the dirt coming out. Rather than carting it to Hastings and then bringing it all back again, we can do it in the paddock and leave the dirt where the dirt needs to be.”

When the flume was imported from Europe during Covid-19, Hugh was told that it was a low water use unit.

“Well, I suppose 20 cubic meters an hour is low water use if other things use 50 cubic metres an hour. But what we used was not even close, so we had all sorts of blockages and problems. So we then had to go to a much higher water use to keep that all flushed. The pumps don’t like pumping high dirt content, even just the dirty silty water.

Hugh’s number eight wire mentality came in handy when he decided to modify the shipping container that the equipment had arrived in to work as the water storage tank, rather than import one. The tank is operated by computer which controls a complex system of augers and siphons, and times the release of silt into the collection ponds.

The water collects in the tank and gets pumped through for re-use. Improvements to the pumps are ongoing so that they can handle the volume of silt build-up without running out of oomph.

“So that means the water can last up to two to three weeks, without changing it. All the water that we get to re-use flows into gutters that are up high, and everything below that is a settling area,” Hugh says.

How much water is he saving? Hugh calculates that without the recycling system he would be using about 500,000 litres a day, but now uses just 25,000 litres (five percent).

“We don’t need a consent with that. There is no discharge and it can be mobile.”

The washing set-up has probably set him back $400,000 all up. And over the past few seasons, with continued improvements being made along the way, Hugh estimates the capital outlay will have now been covered by the fees he has saved for washing.

First published in the July 2022 issue of the NZ Grower magazine.