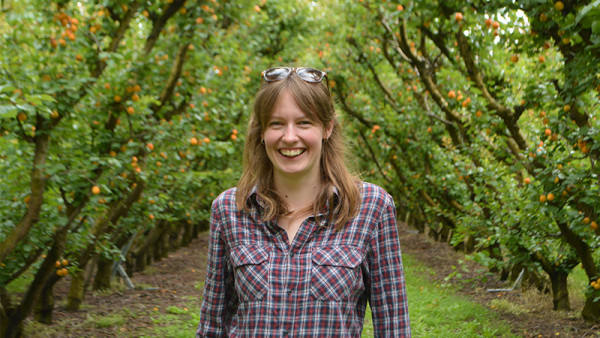 Ellen Watt, winner of the 2019 Central Otago Young Fruitgrower of the Year.

Nestled in the Waitaki Valley in North Otago is an orchard owned by the Watt family.

Waitaki Orchards near Kurow is now run by the eldest three children. Irene (26), Ellen (25), and Geraldine (24) carry out the day-to-day running of the orchard with parents Justin and Julie available for advice and guidance just a short drive away in Duntroon.

For Ellen Watt, a finalist in the 2019 Young Grower of the Year, horticulture is a busy but rewarding industry to be a part of.

“You get such a huge variety, there’s a whole lot of different aspects to it which at times is stressful because you’ve got so many things that you’re trying to juggle.

“Each season is different with new problems and challenges each year.  You get more wisdom every year and a bit more of an idea of what you’re doing.”

The Watt family moved from Patumahoe near Auckland to the Waitaki Valley at the end of 2002 and bought the orchard despite having no horticultural experience. Justin was an accountant and Julie worked in a blood-testing laboratory before becoming a stay-at-home mother to their eight children. Justin spent five months learning the ropes before taking over the orchard in May 2003.

Growing up there were always things to do around the orchard, Ellen says, from putting spray guards around the trees or helping to pack fruit.

The three sisters (Irene, Ellen, and Geraldine) and two brothers (Brian and Duncan) work full-time, while the remaining three siblings, (Alistair, Fergus, and Heather) work part-time at the orchard.

“We watched Mum and Dad doing it growing up, and then when they both ended up with health problems, we stepped up probably a lot earlier than we would have.

“There were certainly a few perks being the bosses’ kids, but there was also a bit of responsibility that comes along with it as well.”

Irene is the staff manager and shares oversight of the packhouse with Ellen, while Geraldine is the harvest manager and also takes care of administration.

“I’m bakery manager, particularly during the winter, harvesting, responsible for a lot of the compliance, and co-managing the packhouse with my sister Irene,” Ellen says.

One of the biggest challenges is keeping on top of everything, particularly compliance which seems to increase each year.

“That role is just getting bigger and bigger ... At times you do feel a bit thinly spread.”

With 20 hectares planted, the Watts grow apricots, peaches, plums, nectarines and cherries. The Sundrop apricots are their main crop with the bulk of these exported to Australia and the Middle East.

The orchard also produces a range of jams, chutneys, tarts, galettes, and sorbets.

“My favourites are the peacharines, they’re quite sweet and they’re the sort of fruit that you don’t tend to eat just one of.”

Like most other orchardists and growers, 2020 offered them its own set of challenges.

“The end of last season was pretty messy, with the last of the fruit going out at the same time as lockdown and it made quite a difference having all the independent stores shut which takes a bit of pressure off the supermarkets. It’s a lot of fruit that didn’t quite get the prices that it normally would.”

“We had six ladies from Vanuatu and they all got trapped here basically. They ended up being our pruning crew, so that was really helpful having them here. We would have been pretty stuck without them.”

Three of the women remain working at the orchard while the others returned home in October, a few months later than their planned July return.

In 2019, Ellen won the Central Otago Young Fruitgrower of the Year title. She encourages other young people in horticulture to give it a go.

“It’s a good way to network. I think that as an industry they’re very encouraging in the competition. Everyone is there to support you, which is a really cool thing to see and be a part of.”

Outside of the orchard, Ellen is a firefighter with the Kurow Volunteer Fire Brigade and a keen member of the Oamaru Toastmasters Club where she is currently serving as president.

“I started that when I was preparing for the national [Young Fruitgrower of the Year] competition and then we all got given a $1,000 grant to go towards professional development and mine is my Toastmasters fees.

“Certainly, personally and professionally that has been a good thing for me.”