First published in the February 2022 issue of the NZGrower. 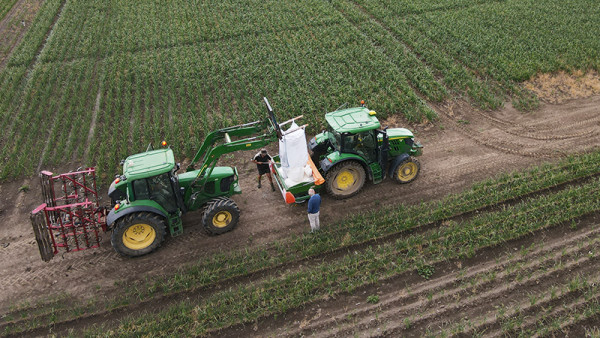 Land is leased around Marlborough, but it is becoming harder to find.

Marlborough growers, brothers Robert Harrison-Jones and Alan Jones, experienced “through the roof” demand for their garlic bulbs when the first bout of the pandemic hit in 2020.

“The first year of Covid, garlic roared out the door,” Robert says.

The family has been growing garlic since the 1970s, the brothers buying the business from the previous generation in 2003, renaming it Garlico because customers struggled to pronounce the previous name, Piquant Garlic. The operation now encompasses 25-ha of garlic, 14-ha of shallots and 20-ha of onion seed each year. Plus, another 35-ha of mustard seed, rye corn and balage.

Marlborough is ideal garlic country with its cold winters, hot summers and fertile soils. Nothing is guaranteed though and last year’s unusually wet winter has had a flow-on effect for this year’s crop of garlic. Wet ground delayed planting around the shortest day and then summer was slower turning on the heat, pushing harvest back a few weeks to the end of January. On the upside, later plantings resulted in a better-formed, albeit smaller bulb.

The business sells its garlic through MG Marketing and Fresh Direct, and it is also included in the home delivery kit, My Food Bag. Robert says sales have settled since the early days of Covid-19, which he attributes to the proliferation of meal ingredient businesses now delivering their kits to homes. 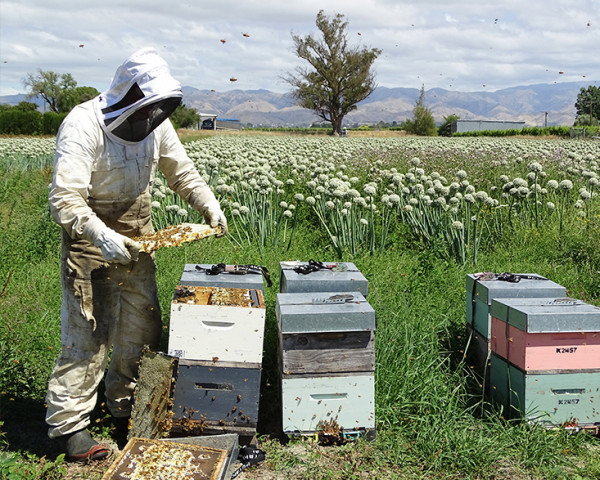 The brothers have their own beehives for pollinating onions.

The brothers grow their own garlic seed, selecting 50 tonnes of medium to large cloves for the next year’s crop. Using their own seed is a necessity rather than a choice as they cannot import new seed from countries such as France due to biosecurity restrictions.

The brothers’ garlic has NZGAP (Good Agricultural Practice) certification that records everything from spraying to employment and is regularly audited. Robert says they can tell customers the day their garlic was harvested and the paddock in which it was grown. Whereas garlic from other countries often has no information on its origin or how it is grown. Robert says some of that garlic can be brought into the country by importers that are NZGAP-approved which enables it to be sold here.

Apart from a pre-emergent spray on the paddocks to get the young garlic growing, the crop is spray-free, and though there are biological options if pests invade, Robert and Alan focus on keeping the plants healthy.

“If you keep the plants healthy, the pests don’t attack,” Robert says. “It’s about keeping the water up and keeping the nutrients up.”

Alan says ladybirds do a good job and are a better option than opening pesticides. “We saw a lot of aphids one year and just left it to the ladybirds.”

All of their crops are grown on leased land around the region and they are constantly on the look-out for fresh land to plant. It is an increasing challenge to find land to lease as grapes spread further up the valleys. On the plus side, their contracting business benefits by preparing land for grapes and that work fills the gaps between their own crops.

These days their garlic is all harvested by machine. The obvious advantage is less staff, with just eight people employed through harvest to operate machinery, shift bins around and grade the bulbs. A bunch of locals including family and students, plus the occasional backpacker, join the team of three permanent staff.

Hand harvesting meant the garlic originally dried in the paddock, with nothing left behind. Now the harvester cuts the green tops off the plants, then staff grade the bulbs and place them into bins that are block stacked in large open sheds. Huge fans dry them out for up to ten months of the year. It costs $100,000 a year to run the fans and keep the garlic dry and healthy for their markets. 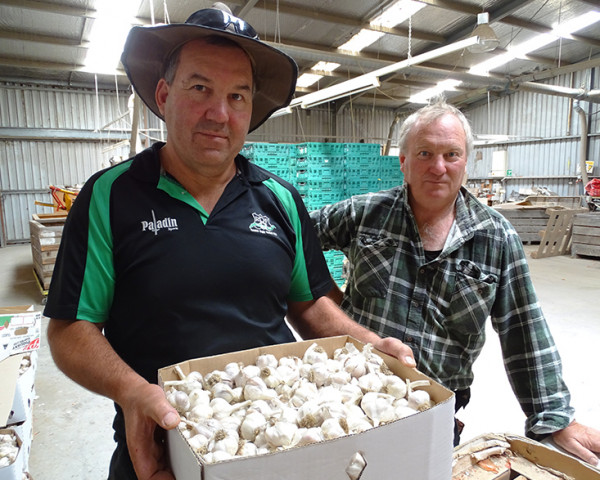 Robert and Alan with the tail end of last season’s garlic as they gear up for the new season.

Robert says the trick is to leave bins of garlic alone because any movement “wakes them up”, prompting them to sprout. Another trick is not to cut off the bulb’s entire root as it causes it to sprout in preparation for planting.

Garlico sells the bulbs in 10kg cartons and smaller pre-packs, sending them out five days a week so that customers get the piquant bulbs “little and often.”

Prices have remained relatively stable over the past eight years, typically selling for around $15/kg – apart from the spike experienced during the first lockdown last year. It means margins are tighter, which are thankfully alleviated by the higher returns the Jones receive from their shallots.

Shallots are a trickier crop and Alan admits there have been a few disasters over the years due to weather, ground conditions or disease. The plants are more susceptible to mildew and pests, needing chemicals to keep them at bay. It is a challenging crop and the knowledge they have built up over the years are secrets they keep close to their chest. Seed is expensive so they have to get it right, but good returns make the extra effort worthwhile. It also diversifies the business, and the growing pattern of the crop fits well with garlic as the shallots are planted in September and then harvested toward the end of February when the garlic has been lifted.

Part of the shallot crop is exported to Australia and the United States where they are more commonly used in restaurants rather than home cooking. Robert says the proliferation of TV cooking shows has contributed to teaching people how to use them, but they are still not widely used in a home-cooked meal.

“People only pick them up from the supermarket if they have a recipe,” Alan says.