An ageing orchard, drainage issues and a lack of experience failed to deter a duo of newbie growers from reinvigorating a family orchard. KRISTINE WALSH reports.

Tracey Scott and partner, Hamish Hulme-Moir, say there are advantages to knowing little about orcharding. 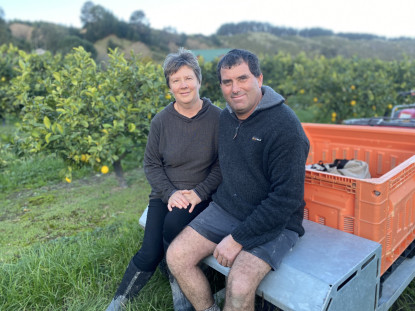 The duo has spent years establishing an orchard in the small inland settlement of Ormond, just out of Gisborne.

“Because we were newbies, right from the beginning we got stuck into learning absolutely all we could,” says Tracey. “To give ourselves the best chance, we committed to doing everything as best we could from day one.”

The three-hectare orchard is part of a five-hectare navel and valencia orange orchard that Hamish's parents, Lachie and Kris, had bought as a going concern in the early 1990s.

“But by then Hamish was ready to leave home to train as a diesel mechanic so, apart from occasionally fixing Lachie's tractors, he wasn't really part of it,” Tracey says. “He [Hamish] was as new to growing as I was.”

When the couple met, Hamish was living in a house he built on the property – replacing an existing cottage. Tracey, a solo mother with two young children at the time, lived just up the road.

“We always joke that we didn't have to go far to find each other… less than 150 metres!” Tracey laughs.

Tracey and Hamish had two children together by 2014 – the same time that Lachie and Kris decided it was time to put their feet up.

“Hamish had always said he would buy them out but made sure that's what I wanted, too,” says Tracey. “He knew it would be a lot of work for both of us so, me being a townie, he made sure I knew what we were getting into.”

Having worked out a split arrangement where they bought one half of the orchard and leased the other, Hamish and Tracey ended up with decades-old orange trees that had seen better days and a whole heap of blackberry.

“We did persevere with the oranges that first year but Hamish is such a perfectionist that was never going to do. We decided to start all over again and do it right first time.”

He connected them with colleague Mathew Bannister, compliance co-ordinator at First Fresh and between them, offered advice and support to Hamish and Tracey from day one.

“Between their input and our research, we leaned towards lemons,” Tracey says. “We learned that, if you treat the trees right, you can pick three or even four crops over a 12-month period.

“Because we knew we'd be doing most of the work ourselves that idea of spreading the load across the year really appealed.”

After devouring every bit of information they could access, the couple decided that, in their “funny little microclimate under the hill in Hill Road,” they would keep a small area of the orange trees behind the house, working to improve their health and pruning them to a manageable size.

The rest of the plantings were to be replaced with two hectares of Meyer lemons and just over half a hectare of Bearss limes.

“In those areas we really did have to start from scratch,” Tracey says. “We ripped everything out – including the shelter-belts.”

Following Matt’s advice not to plant citrus on citrus, the couple leased the property for a crop of maize to help improve the soil structure and nutrients.

They then levelled the ground where it was needed, did more work on the soil, installed new tile drainage and began planting.

They did as much of the work as they could themselves, with a bit of help from family and friends.

"A friend dropped off a tractor with a GPS (global positioning system) to help us plan the rows; the kids used fluorescent pink iceblock sticks to mark where the holes should go; another friend came with the machinery to dig the holes and we all got stuck into planting,” Tracey says.

In those early days, a lot of energy went into ensuring the fledgling trees were well established and put on good growth from regular hand-fertilising, to Tracey trimming the flowers with a pair of teeny, tiny scissors.

That investment of time has paid off.

As planned, the variety of plantings – which fruit early due to the climate – makes for smoother schedules in both harvest and cash-flow. The smaller lemon picks are in October and November, then February and March. Navels are harvested before the main push on lemons from late May through to July, and the limes come off from late January into early March.

Though Hamish is responsible for all the spraying and mowing, he still sets off each weekday for his truck workshop in Gisborne city while Tracey remains hands-on at the orchard.

“I don't like to think about them growing up, but they will and when they do, I will probably put even more time into the orchard,” Tracey says. “It's been a steep learning curve from the beginning and that never stops.

“I recently did a course in pruning, which was really useful, and there's always lots to keep up with around compliance and health and safety.”

First Fresh continues to handle the orchard’s fruit, seven years on from those first trees being planted. Most of the fruit goes to export, with some retained for the domestic market.

It hasn’t all been plain sailing.

A higher than usual rainfall this year has led to lemons being larger than consumers might expect and, like other growers, Tracey and Hamish have struggled to secure labour in a Covid-19 environment.

“We get a small crop in summer – always the best one in terms of value – and we can handle most of that ourselves,” says Tracey. “But we need to get contractors in for the main winter harvest and that's been an ongoing issue which, unless the backpackers return, we don't see easing up any time soon.”

When the orchard can secure workers, Tracey feeds them a hot lunch, bracketed by morning and afternoon tea, to keep them keen.

She says networking, especially with other women growers, is also useful.

“It helps to know that everyone is in the same boat and you are not the only ones facing issues,” she says. “It somehow makes those problems seem less insurmountable.”

The orchard was also fortunate to have the ‘mum gang’ this year – two mothers and a couple of teens – who were employed to help with the lime harvest.

“The five of us were able to do it ourselves within working hours that suited us all,” Tracey says.