First published in the December 2021 issue of The Orchardist. 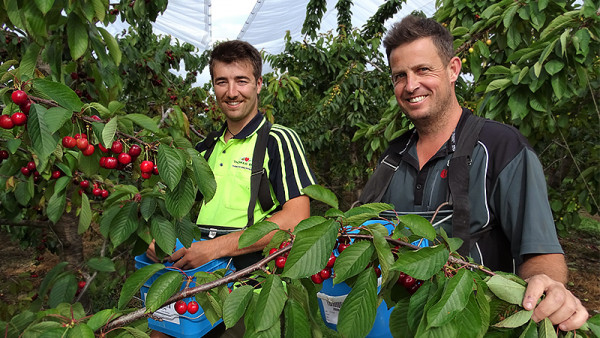 Cousins James (left) and Mark Thomas in the cherry orchard during November.

A cherry sits on top of every ice cream that is swirled and handed out to the long lines of customers at Thomas Brothers’ cherry and real fruit ice cream shop in Riwaka.

It is one of the few opportunities where you can taste cherry ice cream from fruit picked just along the road, at the orchard’s 2.5ha cherry block.

Thomas Brothers – or Thomas Bros – are among the first in the country to pick cherries each year, slotting the harvest into their diversified business that employs 15 family members. It is a multigenerational business that traces its history in Tasman’s Dehra Doon valley back to their forefathers who settled there in the early 1860s.

Mark Thomas is sixth generation in the business which has grown in the past 160 years to encompass 70ha of apples, 70ha of kiwifruit plus male kiwifruit blocks and a pollen mill, then the cherry on top which is the 2.5ha cherry orchard.

Mark is in charge of the day-to-day jobs on the orchards, while his cousin, James Thomas, is responsible for the cherry harvest which began in mid-November and will continue through to mid-January.

Cherries are a good money earner for the business and Mark says the harvest enables Thomas Bros to keep staff employed through the peak of summer so they are good to go for the apple harvest in February.

We’re quite a diverse business and we like to look at different avenues of income, so 16 years ago we decided to give cherries a go.

“There were a few hobby blocks around the place growing cherries so we knew they would grow here. It was also another way of retaining staff by offering work through the summer period.

The cherries finish in mid-January and then we roll straight into pruning and that takes them through to the apple harvest.”

Up to 25 pickers – a mix of permanent and seasonal staff – are employed during the cherry harvest, with approximately ten more staff employed in the shop that sells real fruit ice cream and boxes of cherries. Through the peak holiday season, long lines of people queue for ice creams and cherries at the shop which Mark says is as a great alternative revenue stream.

Employee, Zara Fox, delivers the ice cream with a cherry on top.

In a typical year, the orchard produces ten tonnes of cherries per hectare and sells them for about $20/kg, making it a valuable crop. While the bulk of the crop is sold via the shop, Thomas Brothers also airfreight some to a customer in Auckland and another in Wellington, plus a small amount straight to the wholesale market. Once the tree-ripened cherries are picked, they have to reach the customer within a day or two because they can soften so quickly.

Mark says deciding when to pick is easy.

“The best way to do quality control is tasting them.”

Nine cherry varieties spread harvest out, beginning with the early cropper Earlise and rolling over to a succession of other varieties through the short season including the public’s favourite – a big, dark, full-of-flavour cherry called Samba. A mix of varieties, including Lapins, Sandra Rose, Skeena, Sweetheart, Rosann and Stella – which produces the bulk of the crop – are sold by the carton through the shop at Riwaka or used for the shop’s real fruit ice creams.

A mix of berries from local growers provide other fresh fruit flavours for the ice cream, and gold kiwifruit from the Thomas Brothers’ orchard adds a different taste for customers to sample. Regardless of flavour, every ice cream is served with a bright red cherry on top.

A cherry crop requires extensive protection in order for it to reach harvest. More so in the Thomas Brothers’ orchard, as the Dehra Doon Valley experiences a higher amount of rainfall. Hail cloth, rain covers and bird netting totally enclose the blocks of cherries. Birds will determinedly peck holes in the netting, especially at the beginning of the season. Constant stitching is needed to keep them out as they can destroy large quantities of fruit with just one peck in each.

“They’ll pick at the bird net until they make a hole,” says Mark. “The earliest variety gets a really hard time from the birds.” 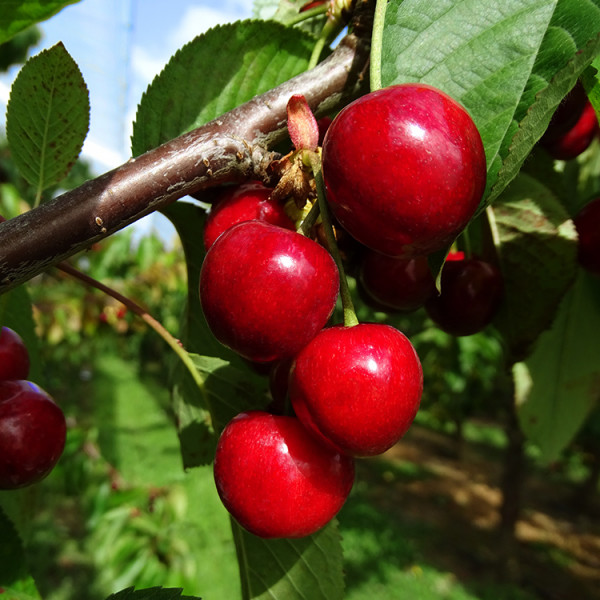 The rain cloth keeps the cherries dry and Mark says it has the added benefit of providing work under cover for the apple thinners and those in the kiwifruit blocks who would otherwise have days off work during rain.

In the 16 years since the cherries were planted and covered, they have replaced about half the rain covers. They had to do some major work on the blocks, thankfully covered by insurance, after Cyclone Gita swamped the cherry blocks in 2018. During the February storm, the nearby river broke its banks and flowed through the lower part of the orchard, leaving debris wrapped around structures and deep layers of sediment which buried the kiwifruit vines beside the cherries.

The cherry crop was small last year due to poor flowering, so this year Mark says they have spent considerable time ensuring they achieve a good harvest. That has extended to tree training and using growth regulators for the first time to contain the growth of the trees so that fruiting sites are more condensed.

The result is “big ropes of fruit” that will provide a bumper crop for the carloads of customers calling into the shop on their way to the Abel Tasman National Park, Kaiteriteri or Golden Bay.

Most years, the growth regulators aren’t needed because they are producing a crop just for local market and likewise, they don’t worry about thinning the crop for fruit size because they can sell a range of sizes.

Mark says they have no plans to expand the cherries because that would require a post-harvest facility for export and create more pressure at a time of year that’s also busy gearing up for apples.

“Selling the bulk of the crop through the shop works so well now that there is no need to change the formula.”