He has never grown Rockit™, or any other variety of apple, but Gisborne grower Sam Tietjen says these miniature fruit represent an exciting new development for his orchard. KRISTINE WALSH reports.

Growing up on a Gisborne orchard, Sam Tietjen learned a lot about grapes and even more about citrus. But for him, planting apples would break new ground.

He has done it anyway. Sam is part of a group of Gisborne growers who are providing satellite orchards for the Hawke's Bay-based Rockit™ Global.

Sam returned from overseas travels four years ago to take over Braemark Orchard, the 50-hectare vineyard and citrus operation his father, John, had operated for over 40 years. 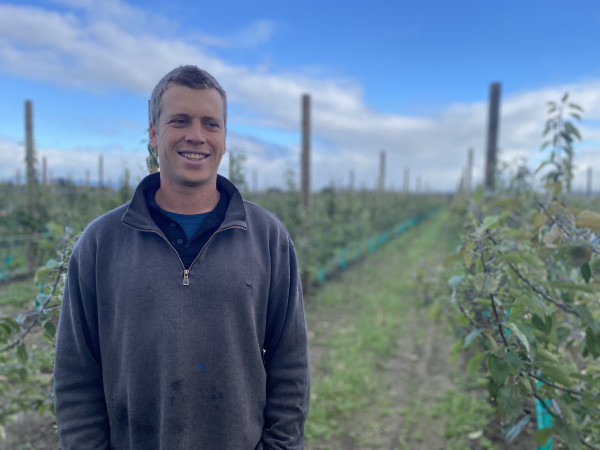 Sam Tietjen says his investment in orchard drainage has paid off

Just 25 years old at the time, he was mindful that John had recently pulled out nearly 10-ha of grapes so there was bare land to work with.

“That's kind of why I came back… there was this land that needed working and Dad had done his time, so it was my turn to do some development and work on new varieties and growing systems,” he says.

“Not long after my return we heard that Rockit was looking at diversifying into Gisborne so we went down to check it out.”

It was still early days, so Sam parked the idea but kept in touch with Rockit to keep the embers burning.

When his neighbour planted a block of Rockit™ apples in 2020, the flames were reignited.

“It just seemed like the time was right, especially with neighbours right there for the sharing of knowledge, staff and equipment if needed,” Sam says. “That gave us the confidence to go ahead.”

Sam created more space by pulling out lemons to open up a nearly ten-hectare block on which to establish his apples, planting five hectares last year (11,500 trees) and with another three-and-a-half-hectares (7000 trees) due to go in this late winter or spring.

There were some concerns, such as: would the fruit grow too large in the Gisborne climate? would it not get the chill factor required to colour up properly?

“That's why we took our time doing research at the front end,” Sam says. “That gave us the reassurance we could overcome any issues by cropping the trees a bit harder, and we get that density through the 2D trellis system.

“Because of the small size of the Rockit™ fruit, the 2D system works very well with better light interception, easier management and ideally, higher yields. It's also well suited for robotic harvesting so that's something we can think about for the future.”

As a qualified engineer, Sam is always interested in problem-solving and finding new ways of doing things, and that came to the fore in establishing his new plantings.

Even before the pandemic put a squeeze on supplies, growers were struggling to source roundwood posts, so Sam looked offshore, to Holland, for a solution.

“For our next plantings we managed to get a new steel product which is well proven over there, but a bit of a game-changer for us,” he says.

“They're easy to use – with a clip system for the 12-wire frame – and being around a third of the weight makes for much better handling.”

The cost of the infrastructure, along with Rockit licence fees, is a big investment for Sam, but he was confident about potential returns and keen to diversify his orchard.

And if he wanted more reassurance, he only had to look next door to his neighbour who was just 12 months ahead in their plantings and had a decent harvest less than two years after their trees went in the ground.

“A second-year crop is not such a big concern for us, we are more interested in making sure the trees are properly established on the structure,” Sam says.

“But we are certainly hoping for a good crop in the third year, so seeing our neighbour's results gives us even more confidence for the future.”

As to the future, Sam is looking forward to the ease of Rockit's single-desk structure and to being part of its famously innovative marketing and product placement strategy.

“Having access to all that research and support from Hawke's Bay has given the opportunity for a really exciting development for us,” Sam says. “We're really committed to making the Rockit™ variety work here in Gisborne and to building meaningful sustainability for our operation.”

First published in the June 2022 issue of the Orchardist magazines.