A truffle hunt. It’s the closest thing to an edible treasure hunt, sniffing out and digging up a black delicacy with almost as much mystery surrounding it as a buried treasure. HELENA O’NEILL talks to Colin and Maureen Binns about the growing interest in New Zealand truffles.

On a lifestyle block at Paengaroa in the Bay of Plenty, dark clouds and showers of rain fail to deter over a dozen eager truffle tasters assembled for Te Puke Truffles’ first hunt of the season. Decked out in sunglasses, gumboots and rain jackets, visitors listen attentively to Colin Binns’ brief outline of New Zealand’s truffle-growing history and the wealth of knowledge gained over the past 14 years. 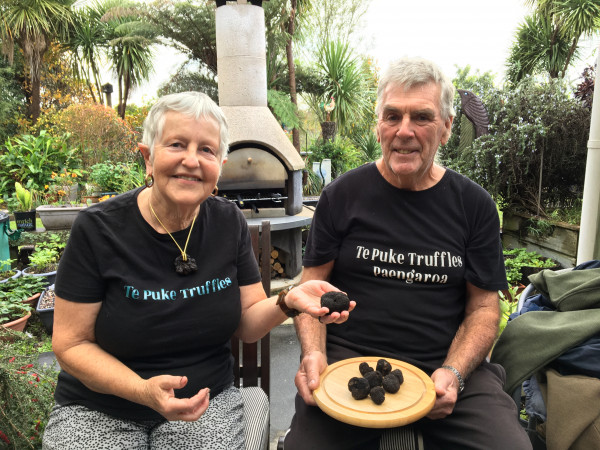 “Secrecy has surrounded truffles for hundreds of years. Our aim is to get everyone in New Zealand to taste truffles. We’re getting chefs here and hosting truffle hunts and sharing our knowledge,” Colin says.

“We’ve only got 212 trees, we’re quite a small truffière [truffle orchard] but boy, it keeps the two of us busy,” Maureen adds.

After visiting truffières around the North Island the couple planted more than 200 oak and hazelnut trees in 2008. Colin estimates about 50 tonnes of lime was added to the soil to bring up the pH (alkalinity) level before planting out the half-hectare truffière.

The first Périgord black truffles were found in 2015 and now the Binns are supplying restaurants and hosting truffle hunts during the harvest season.

“You always have concerns around how many truffles you’ve got and what sort of quality you’re going to get,” Maureen says.

“Two years ago, the aroma was fantastic, last year the aroma wasn’t as strong. It depends on the climate, how much rain and how much cold you get [that season]. We can’t change those things; all we can do is try to produce the best that we can.

“I get nervous if I worry too much, but I’m not going to worry because I know there are truffles there and I know that we’ve got a good dog that will find them.”

The harvest season is eight-year-old Jed’s time to shine.

The springer spaniel is a vital part of the Binns’ truffle operation. Those gathered for the truffle hunt can testify to how swiftly Jed’s nose can detect the aroma of a ripe truffle. Mere moments after being put to work, Jed has indicated, and Maureen has her own nose to the ground to verify her dog’s find.

Gently brushing a layer of soil away, Maureen struggles to detect the aroma. Jed’s paws are called into action and after a brief dig, Maureen’s nose is back to the soil and a few moments later what looks like a clump of dirt is nestled in the palm of her hand. Success! It’s a truffle.

The couple used to contract a travelling truffle dog service to detect ripe truffles, but decided it would be best to train up their own dog in order to check the truffière regularly.

“The handler said the springer spaniel is a really nice dog, which they are, with a really good work ethic, good nose, and you can have them as a nice dog. I realised with the truffle season, every Friday, Saturday, Sunday (and an extra day sometimes) for June and July we have people booked and paid to come here, we must have a dog!”

Having their own truffle dog on site proved invaluable, with Jed regularly finding them every other day instead of relying on someone else to bring their dog to check sporadically. Last year the Binns decided they needed a backup dog as Jed grows older.

“Sam the spoodle is absolutely gorgeous. He’s a naughty puppy, but he’s absolutely lovely and not too big.”

When it comes to training, they hide small bits of truffle in film canisters with holes in the top and store the baits in the freezer.

“You then train the dog by concealing the baits. We use upside-down flowerpots and conceal the baits under some and get the dog to tell us where the aromas are. Little, fluffy truffle puppy has done really well. Now I’m just training him to scent which of the flowerpots has a truffle bait and sit down. I can’t do that when the big dog is around, otherwise Jed [will] go around and knock the pots over and say there’s all the baits.”

As for the technical side of things: “We chose Périgord because they are the top quality that were available to be grown. It’s a beautiful looking truffle.”

According to the NZTA, Périgord black truffles thrive best on sites with free draining soils, preferably loamy soil with no more than 30 percent clay. They need a soil pH of 7.5 or higher, around 700mm of rainfall, and a good sunny aspect with high sunshine hours, to create an open, sunny woodland. At least 50m (preferably 100m) separation from any tree which may harbour competing ectomycorrhizal fungi is needed. 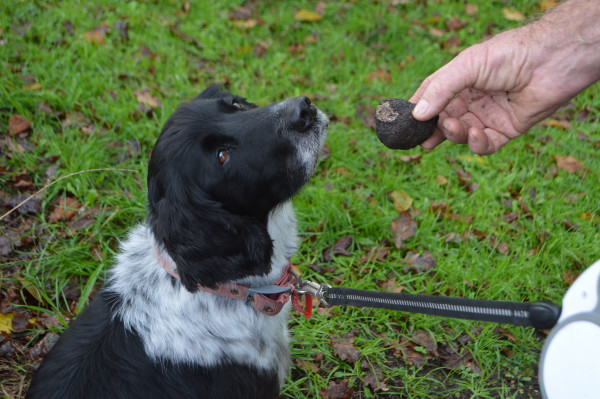 Truffle dog Jed examines one of the truffles he scented

Soil pH and rainfall can be artificially amended though the addition of lime and installation of irrigation, while the history of a site is also important. Sites with high concentrations of copper or phosphorus may be unsuitable unless levels can be reduced.

At the end of each harvest season, it’s straight into preparing for the next one. Maureen says there’s a huge amount of pruning to be done before loosening the soil, reinoculating the trees, and testing then adjusting the pH levels if required.

“In November and December, the little babies start growing again so then you have to worry about the rainfall and how much grass growth there is – then Colin either mows or weed-eats between the trees. Come March and April you start worrying because some of them start popping their heads up through the soil and you need to cover them over again.”

A cooling period is also needed to bring on ripening, she says.

“It’s a little bit like dealing with leeks and parsnips. You actually need to have that chill to get the ripening, it’s better when you get the frosts.”

From late May onwards the couple begin hosting visitors until the season ends by early August.

“So many people are now learning about truffles and are able to taste them in a safe environment. It’s a safe and relatively inexpensive tasting.”

Having a good freezer stash of last season’s truffles has been a lifesaver in the lead-up to this season as the Binns were asked to host a horde of visiting chefs, politicians and business leaders all before the season officially began in June. They prefer to give the truffles enough time in the ground to fully develop their aromas before digging them up, to ensure the best flavour.

“I’m still experimenting with how to use truffles. I microplaned lots last season when we were under Covid-19 restrictions and a lot of restaurants weren’t open. So I can make up truffle butter, truffle ice cream, truffle anything with the truffles I froze from last season when they were ripe.”

As part of the tours Maureen offers up truffle bread (made like garlic bread, only with truffle butter instead), as well as shortbread, macadamias, and popcorn using truffle butter or truffle salt. Her favourite way to showcase truffle is through scrambled eggs.

“You have your jar of eggs with your ripe truffle wrapped in a tissue inside the jar. After a day or 48 hours in the fridge the aroma has gone through the shell of the egg and egg white and into the yolk. The aroma coming off them once you’ve beaten the eggs up is amazing. Then I slice or microplane some truffle on top.

“On the truffle hunts I overdo the aroma and flavour a wee bit as some people don’t have a very sensitive sense of taste.”

The Binns also supply truffles to a brewery in Upper Hutt and are chuffed with the results.

Kereru Brewing Company chief executive and head brewer Chris Mills says the idea to use truffles in beer came about when Maureen's son said his mum who grows truffles was in town and asked if he wanted to meet her.

Chris says the beers are some of his company’s most highly rated.

“I think truffles work well in beers that benefit from the additional complexities of mouthfeel and flavour. Black truffles meld nicely with the malt and oak with notes of sherried milk chocolate and present a creaminess to the palate. The truffle integrates even better over time. The result is subtle but lifts the beer to a whole new level.”

And it’s only the beginning of his plans for incorporating truffles into Kereru’s brews.

“We are exploring other ways to work with truffles and while the NZ Whisky Barrel-Aged editions are very limited, we are working with them in Belgian-style dark ales where the malt and yeast character complements the addition of truffles.”

A brief history of truffles in New Zealand

In 1985 Ian Hall began research on the Périgord black truffle at Invermay Agricultural Centre near Dunedin after first hearing of truffle cultivation research in France. In 1987 the first batch of New Zealand produced Périgord black truffle infected seedlings was planted in two North Otago truffières. Over the next few years, more truffle-inoculated seedlings were planted in other regions around New Zealand.

The first Périgord black truffles were found in a Gisborne truffière in 1993, five years after planting. Production of larger quantities in this truffière began three years later.

In 1991 growers formed the New Zealand Truffle Association (NZTA). In 2002, truffles were made a recognised product group under the NZ Horticultural Export Authority, requiring all exports of truffles to be licensed.

The most common host trees for truffles in New Zealand are English and evergreen oaks, hazels, and some species of pine. A thriving industry now produces commercial quantities of extremely high quality:

Truffles are grown throughout New Zealand except for the sub-tropical Far North and very wet West Coast of the South Island. Truffières (truffle orchards) have been planted from Whangarei to Southland, but there are larger clusters of growers in the Canterbury and Bay of Plenty regions. Bianchetto and Burgundy truffles can tolerate cooler climates than the Périgord black truffle, which prefers plenty of sun and warmth.

First published in the July 2022 issue of the NZ Grower magazine.