First published in the April 2022 issues of The Orchardist and NZGrower. 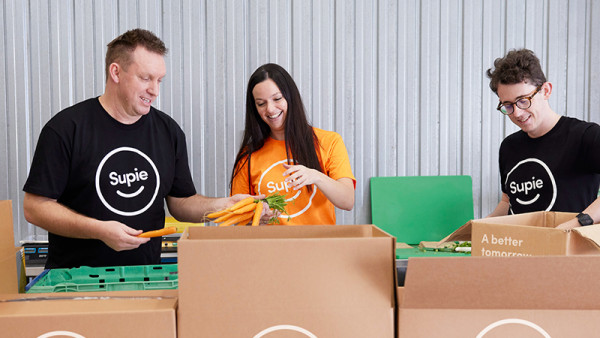 Fruit and vegetables being packed at Supie’s warehouse - Nick, Sarah Balle and Cahan.

Online supermarket, Supie, has gone from strength to strength in the nine months since it was launched, and has even bigger plans for the future.

Sarah Balle, who founded the company, grew up on a Pukekohe vegetable growing property and saw for herself the amount of wastage caused by the long supply chain between supplier and end customer. Not only does the produce of many fruit and vegetable growers not meet supermarket standards, even if it did, they achieve small margins.

Sarah is also very aware of the carbon emissions from dumping food in landfill when a growing number of New Zealand children are living in food poverty. It’s estimated that seven million kilograms of fruit and vegetables is wasted every year in this country at a cost of $1 billion.

So Supie was launched in June last year with 1000 members in the Auckland area, offering a 48-hour delivery window from its south Auckland warehouse in Wiri. There were just ten staff handling the 2000 products on its virtual shelves and just over 100 suppliers. Supie welcomes smaller brands and artisans not producing on a large scale, which means that its customers are able to enjoy products they might not be able to find in their local supermarket. As well as deals, discounts and free product samples, Supie also offers cashbacks which regular customers can use or donate. Now it’s grown to have 16,000 members, who enjoy same-day delivery which is free if their order is over $70. There are 25 team members involved, with personal shoppers handling over 5000 products which come from more than 300 producers.

Sarah, who trained as an accountant, says Supie’s produce department offers some of the freshest fruit and vegetables to be found in Auckland.

“Our produce bundles make up a significant portion of our sales,” she says.

“Our customers often showcase the produce they receive on social media and to our 7000 Instagram followers.

We love being able to educate consumers on produce and introduce them to fruit and vegetables that they wouldn’t typically buy in a traditional supermarket.

Supie customers often say they can’t believe how long the produce they receive has lasted and its quality, she says. Many say their deliveries make it easy to eat healthily, they have appreciated seamless deliveries over lockdown periods, and are impressed with the lack of plastic packaging. Some say vegetables such as cauliflower and spring onions are as fresh as if they’d picked them from their own gardens. Also stocked are a growing range of other grocery items such as milk, cereal, spreads, pet food, toilet paper and beer and wines.

“This requires significant investment, so we will continue to focus on the Auckland market until we raise the funding to expand,” she says.

Asked about the Commerce Commission investigation into the supermarket sector she says it was a once-in-a-decade opportunity to make a meaningful change to set up a fair food future and a better outcome for every New Zealander.

“We believe the recommendations don’t deliver on creating the fair food future that we want to see for decades to come,” she says.

But the sector still needs to improve and positively contribute to everyday consumers.

“Supie is the force for change, and a better tomorrow will only be achieved if Kiwis support the mission for better and fairer access to food in Aotearoa,” she says.

“We have unwavering commitment and will continue fighting for New Zealanders, food producers, and future generations.”