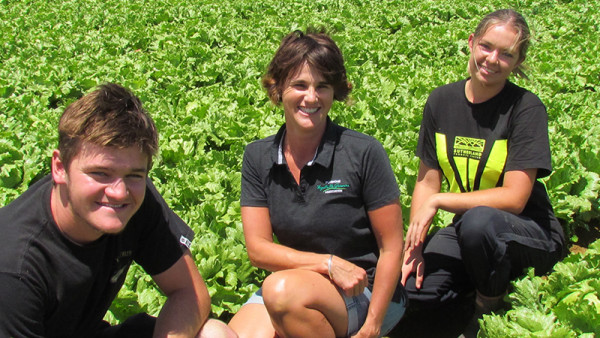 The Pukekohe Vegetables Growers’ Association’s (PVGA) Centennial Scholarship has got off to a great start with not one but two recipients in its inaugural year.

“Both candidates were amazing and we decided to give them both something,” says PVGA president, Kylie Faulkner.

“It wasn’t the best timing with a global pandemic, however we had a very high calibre of applicants and we were pleased to be able to split the scholarship.”

So Keegan Neate and Kirianna Matthews will both receive $2,500 towards their horticulture studies at Massey University this year.

I’ve enjoyed everything. I haven’t had a dull day

Keegan, 18, took part in a Pukekohe High School Horticulture Pathways programme last year organised by its head of agriculture and horticulture, Dave Matthews, under which a number of pupils spent three days each on work experience at three local businesses, Punchbowl, A S Wilcox and T & G Global then a follow-up day at each.

Keegan says he particularly appreciated the way in which kiwifruit and blueberry grower, Punchbowl, showed the breadth of careers that horticulture could offer. And he made such an impression he was offered work over the summer then returned to do afternoon shifts through the packing season.

This Christmas break he’s been working at a number of Punchbowl properties all within 30 minutes drive of Pukekohe and is based at Port Waikato at present.

“It’s cool to see the different set-ups,” he says. “I’ve enjoyed everything. I haven’t had a dull day.”

He’s now looking forward to heading to Massey to start on the three-year Bachelor of Horticulture Science with help from a Punchbowl scholarship. The PVGA scholarship will make a big difference as well, as he’ll be able to concentrate on his studies rather than needing to look for a part-time job in Palmerston North.

Kirianna Matthews,19, the second PVGA scholarship recipient, has already completed her first year of the degree and has been back working on the planting team at Sutherland Produce over the summer break. She had worked there for several two-week stints through 2019 after working at local restaurant, Bracu, and PGG Wrightson in her school holidays.

“Until Year 11 I wanted to be an agricultural vet,” she says. “But then I saw how many jobs there were available in horticulture. And I live in the right place to be in the horticulture industry.”

Massey was only offering agricultural science degrees until 2020, so she was quick to enrol, although the year had its obvious challenges, and she spent three months back at home during lockdown.

“But it’s everything I wanted to do,” she says. “It hit the nail on the head when it came to relevance to the industry, and you can be more specific depending on what you want to do.”

She’s particularly enjoyed soil science and would maybe like to work as a rep for a horticultural supply company in the future.

She already has good contacts with local Pukekohe growers, but sees a big benefit of receiving the PVGA scholarship as getting her name and face better known through networks in the area where she wants to work in the future.

“It also means so much less stress, as I was working 45 to 50 hours a week while studying.”

Kylie says both of them can be proud of their applications for the scholarship, which showed their appreciation of horticulture’s role.

“They both brought different things to the table,” she says.

Until Year 11 I wanted to be an agricultural vet, but then I saw how many jobs there were available in horticulture

As well as completing their applications and providing references, they were interviewed by a small scholarship team made up of PVGA committee members who then made the final decision.

The scholarship was the brainchild of a few PVGA members who recognised that growers need to encourage young people into their industry.

“And we wanted to support some of our local people in our own backyard.”

So the scholarship was kicked off at its centennial dinner in 2018, where a painting by local artist, Logan Moffatt, of a Pukekohe vegetable growing scene was auctioned. All the proceeds went to jump-starting the scholarship fund, with the PVGA matching a very generous bid by Gerry and Yvonne Aarts, long-time growers in the area.

“It was a learning curve for the association as we then had to look into all the legal aspects, and become a charity to be able to go forward with the scholarship,” Kylie explains.

The long process was completed last year and so PVGA was able to offer the scholarship for the first time.

Future funding will depend on how active the association is in coming up with more events.

“There are some pretty cool things in the pipeline.”