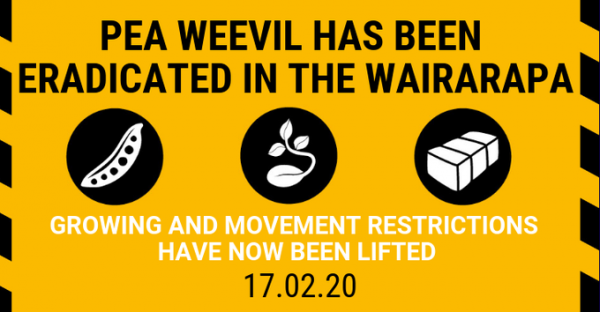 “To our knowledge, this is the first time a pea weevil population has been successfully eradicated anywhere in the world. This just goes to show what can be achieved when Government, industry and communities work together,” says Minister for Biosecurity Damien O’Connor.

Part of the reason for the success of this biosecurity response was that the infestation was found early and Biosecurity New Zealand took swift, decisive action to contain it and prevent it from spreading to other regions.

The existing controlled area notice (CAN) and conditions will no longer be in place. The CAN has been replaced (link here) with one relating to a further season of monitoring of some commercial pea crops in a 5 km radius from the last detection (in Masterton in December 2017. MPI will continue to monitor commercial crops in this area and will soak test harvests grown for seed. This is to provide additional surety of eradication. MPI will work directly with the relevant growers on this in the coming months.

Restrictions on growing peas and using pea straw across the Wairarapa have been lifted.

Biosecurity New Zealand and Process Vegetables NZ would especially like to thank Wairarapa growers for their support and co-operation.  Through their support and the actions of the community, this threat has been able to be contained, protecting the rest of NZ from the impact this pest could have had.

Click here for the link to the MPI update.