First published in the November 2021 issue of The Orchardist. 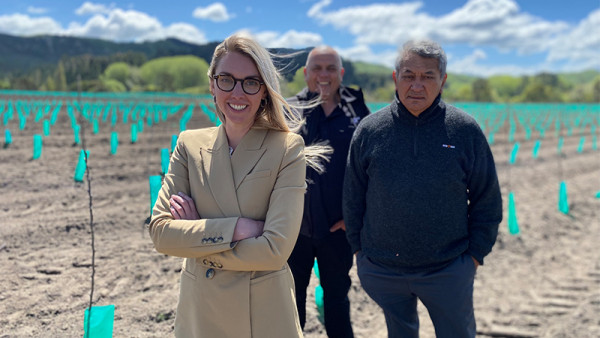 A global pandemic, multiple lockdowns and some very wet Wairoa weather have failed to thwart ambitions to use horticulture as a vehicle for better land use and better lives for whānau.

Tātau Tātau Horticulture (TTH) welcomed 12 new cadets to its fledgling horticulture scheme, signalling the start of both their employment and the launch of an exciting new planting programme.

The pōwhiri at Kihitu Marae, Wairoa, was a joyous occasion.

The next day a case of the highly contagious Delta variant of Covid-19 was detected in the Auckland community and New Zealand went into Level 4 lockdown.

TTH general manager Clare Easton says getting the planting programme up and running has “certainly been a challenge”.

“I started this job in February and like the rest of the horticultural industry, we have had a lot to overcome,” Clare says. “But we are determined to get there.”

‘There’ is place where local iwi, and Wairoa in general, get to benefit from initiatives that make better use of land, provide meaningful long-term employment, and boost the local economy. 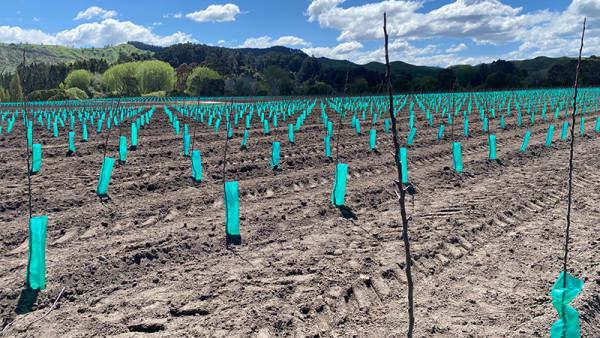 With its gentle contour and proximity to the mighty Wairoa River, Tara Block was identified as the perfect spot for the trial orchards.

In the second week of October, the new cadets, along with a small army of extra hands, planted out the first development of Envy apples and a small trial of PiqaBoo pears. The plantings were spread over a ten-hectare portion of Ohuia Incorporation's Tara Block, just 15 minutes from Wairoa township.

“We had done months of preparation but there was definitely a sense of urgency in that Wairoa has experienced huge amounts of rain and we just had this small window of opportunity between weather fronts,” Clare says. “We put out a call for whānau to help our own workers and everyone pulled out all the stops. Agnew Transport Services left Hastings at 3.30 on the Saturday morning to bring over 22,000 trees and GPS planters, and the planting crews worked tirelessly through the weekend. They even worked on Monday to get the block finished.”

TTH is a subsidiary of Tātau Tātau o Te Wairoa Trust (TTOTW) – the post-settlement governance entity for Wairoa, representing some 34,000 people in seven iwi and hāpu clusters. A partnership between TTH and the Māori-owned Ohuia Incorporation, the block is a joint venture in which Ohuia owns the land and TTH has provided capital for the biological assets and orchard infrastructure. Any profits are split down the middle.

Further plantings of Envy and high-colour Royal Gala apples are planned for next season to take the trial orchard to a total of 18 hectares.

“It is a 25-year partnership, but Ohuia could, if it wanted, buy us out over time,” Clare says.

The purpose is not for TTH to accumulate assets, but to help Māori landowners build capability to create a vital horticulture industry in Wairoa.

“Any work the trust does has to take into account the four pillars of economic, social, cultural and environmental well-being,” he says. “Each of those pillars must be equally strong. That's why we are also focusing on our housing initiative, on care of the environment, on how everything we do affects our land and our people.”

Wairoa is a small town with a population of just under 9,000 in the Hawke's Bay region. It makes up 41,300 hectares of the region’s 1.4 million hectares. It is land-rich territory: 2,000 of the available 22,000 hectares are under Māori ownership and the remainder has Class 1 Land Use Capability that is required for horticulture. Previously dominated by forestry, sheep and beef farming, fewer than 225 hectares are currently in horticulture production.

“The potential for industry growth in the region is huge,” Leon says. “We didn't want to see all these big corporations coming in, doing what they want with the land and sending any benefits out of the region.

“We want horticulture to be something we do ourselves, for the good of our people.”

That is not to say that TTH does not see economic success as an important driver. By the time those first Envy apples are ready for market, the group plans to have built a post-harvest facility that will create up to 300 jobs along with its on-orchard work.

Work on the Wairoa Horticulture Hub began in earnest in October 2020, when TTOTW, Ngati Pāhauwera Development Trust, Hawke's Bay Regional Council and Wairoa District Council were approved for a $2.3 million Provincial Growth Fund investment. The funding was to develop a trial orchard, engage landowners to diversify into horticulture, and develop an integrated skills and training programme.

With close to 60% of whānau employed at the local meatworks, the idea was to reduce dependence on one industry, while increasing productivity of the whenua.

“A lot of that land is in long-term leases where the benefits don't flow back to whānau,” Clare says. “We see our role as facilitating the opportunity to provide capital and expertise to help achieve better outcomes.”

TTOTW is hoping to contribute an extra $8.2 million to the local economy each year, while staying firm to its values around the environment, social well-being and culture. And despite some pandemic hiccups, it is well on its way. In addition to the trial orchard, it has built a database to help identify owners and pockets of underutilised whenua. Of those identified, it is supporting the owners of 25 whānau blocks in undertaking feasibility studies for the future of their whenua.

“Now we have the governance structure in place we are in a strong position to help whānau and hāpu do something with their land that is beneficial for both them and the wider community,” Leon says.

Chair of TTH and chair of Ngati Pāhauwera Commercial Development, Tom Keefe, says the initiative is both a vehicle for change and a wrap-around structure for support.

“We look at the Ohuia orchard as being like a show home,” he says. “We've known that horticulture could be an exciting way forward for our people and this shows exactly how it can be done.”

TTOTW's new crew of cadets are well into their training, with T&G Global on board to offer support and expertise. “This is not a short game,” says Clare. “It's a long one that needs to have benefits for generations to come.” 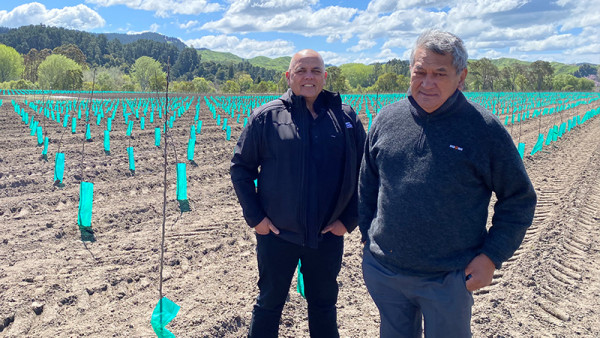 As chair of Ohuia Incorporation, Rangi Manual is well placed to be a partner in the Tātau Tātau Horticulture Ohuia Station trial orchard.

Rangi says Ohuia Incorporation was keen to become partners in the trial because it was an opportunity to better utilise land that is suited to horticulture.

“To make such a change, even with land that has mixed or multiple ownership, is not insurmountable,” he says. “It just requires people to come together with a common goal.”

Set directly adjacent to the Wairoa River, the newly-planted orchard underwent some gentle contouring and tile drainage before the soil was worked up and lime applied.

Having used a GPS-assisted planting method, the team then set to work putting in post and wire structures to keep the young trees safe and supported as they mature into production.

Even at their fledgling stage, getting them in the ground was a major milestone, says TTOTW chair Leon Symes.

“What they represent is our aim to help get Māori whenua in use,” he says. “If we can lift productivity there, we can help whānau lift themselves.”